Firstly, thank you to everyone who attended the performances in Fukuoka and Hiroshima. Man, it still feels like a show that makes me push myself to the absolute limit, so I’m very happy if everyone enjoyed themselves. By the time this column gets published on Friday, I’ll have already finished my two performances in Osaka. However, I’m actually writing this on the morning of the 22nd (Wed) at home in Tokyo. There’s not enough time to finish this until my departure to Osaka though, so I’m going to be using a borrowed laptop. That’s pretty uncharacteristic of me. I’m all IT and stuff. (Don’t ask me what that means.)

When I was in Fukuoka, I had some ramen, played the show, got together with old classmates for some drinks, ended the night with ramen, had more ramen in the morning, and then commuted to Hiroshima. As such, it was a constant barrage of ramen down in Fukuoka… But then, what about Hiroshima? That’s right: with Hiroshima, it’s gotta be okonomiyaki.

Shape the batter into a pancake shape on the iron plate, shake on some katsuobushi, pile on the cabbage and bean sprouts, green onion, tenkasu, the optional squid tempura, and on top of that, 4 or 5 thin slices of pork meat, then put in some more batter. On the side, add a little oil to your yakisoba noodles, fry them while loosening them with spatulas, take the okonomiyaki, flip it around on top of the yakisoba, pressing down firmly with your spatulas to draw out the water. Then, skillfully use one hand to break an egg, pour it on the iron plate, break the egg yolk and spread it around thinly with your spatula, then take the okonomiyaki that’s now become one with the yakisoba and flip it around on top of the egg. Then it’s finally time to spread on the long-awaited Otafuku sauce on with a large brush, sprinkle on some pepper, aonori, katsuobushi and white sesame seeds, and it’s done. I dare say that among ramen, udon, gyuudon and other varieties of Japanese fast foods, this one has easily the longest wait time from the moment you order until it’s in front of you ready to be eaten. It even looks so delicious way before you can finally dig in.

However, as far as I can see, the way you make Hiroshima-style okonomiyaki is always the same, no matter what the restaurant. Unlike udon or ramen places with their special soups, sauces or handmade noodles, I don’t think you have that with okonomiyaki places. There aren’t really any ingredients with limited availability either, no “our store uses cabbage/bean sprouts from (insert prefecture here)” or anything like that. The thick sauce that I call the star of the show in okonomiyaki — the one thing that absolutely must be present — is the Otafuku sauce, available anywhere.

Thus, Okonomiyaki Village, a building with tens of such okonomiyaki restaurants, feels like a really strange spot for me. In my case, I had Murakami from Candy Promotion take me along, so all I had to do was follow him into a store, sit down and go “ahh, this is delicious!” But for those visiting from outside of Hiroshima, how are they going to choose which shop to enter? How are they going to judge which place is good and which is lacking?

Well, if I had to name one difference, I guess it’d have to be the manner in which it’s prepared. I suppose when it’s made from the same ingredients piled up in the same order of sequence, topped off with the same sauce, the only variable you can judge by is the preparation. To make a forced musical comparison, it’d be sort of like having several bands using the exact same instruments to perform the exact same pieces of music, and the only thing you could judge by is the level of the live mixing at the venue. When you think about it like that, it makes it all seem really nitpicky.

So, the okonomiyaki (which indeed did look well-cooked) was delivered to me. The man asked us, “would you like some green onion with that?” and without a moment’s delay, Candy Murakami replied “yes, please.” He threw a mountain of shredded green onion on Murakami’s okonomiyaki, covering it entirely. Uhh… I love green onion, but I wasn’t sure about the amount and the way in which it was distributed. If you wanted a forced musical comparison, it’d be the same as mixing a piece of music by drowning every single track in reverb. There’s no need to be that avant-garde: simply putting a tiny bit of reverb on just the vocals alone feels natural and pleasant. That’s what I was thinking as I told the man, “can you just put a little bit in mine?” “You got it“, he said. Below is a picture I took of my okonomiyaki right afterwards. What do you think? Is that perfect or what?! Ahh, I just wolfed it down. It was great!

With that, I’m finally finishing this up now on the day of the 23rd (Thu) at my hotel in Osaka. Thank you to everyone who came to Banana Hall on the 22nd. We’re now heading out to have some Indian curry with the band as we get ready for round two at Banana Hall. 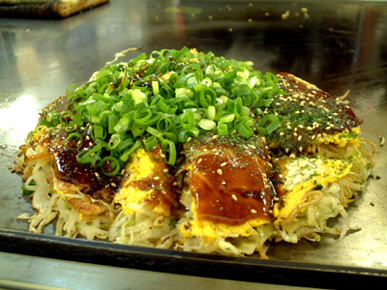 Just a bit of green onion