This week, I’ll write about the rice noodles called pho that I got to eat during my little vacation. Like Japan, rice is also a staple food in Vietnam, but for them, “boiled white rice” as we enjoy it is not their only everyday food made out of rice. They also have the ultra-thin rice paper that you wrap around different foodstuffs, bánh tráng, and the rice noodles, pho.

With a light, transparent soup made out of cow and pork bones, the white noodles themselves are about half as thin as Japan’s udon, semi-transparent and soft. If you put in raw, thin slices of beef, you get pho bò. You can add some green onion and coriander if you want to be fancy. As accompaniments, take a plate on which you pile on heaps of the mint-like leafs and the other kinds of green leaves whose names escape me now, some bean sprouts, and finally some limes cut into wedges. The way to eat it is to first take some leaves, put them on top of the pho, then the bean sprouts, then squeeze in some lime, and then eat — it works out in a way that when you do, the beef will have already gotten cooked in the heat of the soup.

Pho is also well-known in Paris, France, a place with close historical ties to Vietnam. There are two large Chinatowns in Paris that started as places with big Chinese-style supermarkets that sold Chinese foodstuffs, then grew to include items from Japan and other places in Asia. There are also many Asian restaurants on the streets, linking together the buildings. Though they’re called “Chinatowns,” to me it seems like over half the restaurants there are Vietnamese, with the rest being Chinese, Thai, Laotian and Cambodian. So in that sense, they could as well call them “Vietnamtowns.”

Within those Vietnamtowns, the items found on most of the restaurants’ menus include pho as well as little fried spring rolls wrapped in rice paper, also known as nem. For the people in Paris, these two are the kind of items that even if they haven’t eaten them personally, I doubt there’s anyone who doesn’t at least know of them. The Vietnamtown in the 13th district was around 10 minutes by bus from where I lived, so I often got to visit shops specializing in pho. All the other Japanese residents there as well loved pho and the commonly shared opinion was that “rather than going for ramen and being disappointed, the pho here tastes somehow better and fresher.“

Since around the beginning of the year, I was getting fed up with all the ramen I was eating and I’d been thinking I wanted to have pho again since it’d been a while. I thought it was then best to get it authentic, and that’s why I was so dead set on my destination this time being Vietnam.

For someone like me who loves to eat, Vietnam is a pretty great place to be. Of course, there are a great number of other things I want to eat there aside from pho, too. Anyway, since the plan was to eat three times a day — in the morning, at noon and in the evening — that meant I was going to have 10 meals while in Vietnam. Checking my guidebook, it said that all pho shops open at 7 o’clock but that it’d be really crowded at breakfast. However, I had my mind set on having my daily “morning pho.” Thus, every morning I’d set out at 9 o’clock as planned, I’d try three different shops, and at each one I had a bowl of pho. (Though because of influenza-related reasons, I didn’t get to eat pho ga as it includes chicken.) I think some of you might be thinking “Pho? First thing in the morning?” but really, portion-wise it’s about the same as eating half of a light niku nanban soba. You’ll be hungry again three hours later.

With its low-calorie image, pho has also been gaining popularity in Japan for some time now. Like Italy’s spaghetti, having some foods you like and know that you can get almost anywhere on your journeys is very valuable to a traveler. If you include my travels in ’94 and ’95, I’ve now had around seven bowls of pho in Vietnam.

So, what do you think about Vietnam? 10 years ago when I last visited I didn’t see any other Japanese people there aside from me, but perhaps because of the fact that you can now stay there for up to 15 days without a Visa, I saw quite many young Japanese female travelers there this time around.

Those of you who are interested should head on over to the “World of Ramen” section of my site where I’ve added a review of one of the pho-specialized shops in Ho Chi Minh City. For those of you who want to know even more on Vietnam, I recommend joining the special paid site “Kita-Aoyama Image Redevelopment”, opening on August 20th. (I’m at it again.) 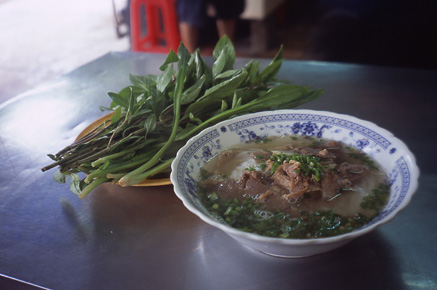