※ This column is a continuation. Please read No.012 first.

I got a bit of a reaction from writing about “mass produce” ramen shops last week. I had quite a lot of friends and acquaintances ask me “where can I find a shop like that, do tell!” So I was thinking it might be fun to get together with everyone and go on a “mass produce tasting tour” and feel all empty inside together. Well, I won’t though. Not like anyone would show up anyway.

That feeling of lifelessness that begins to weigh you down by the second half of your meal when you’re eating at “mass produce” ramen shops where you can’t even see the face of the person making your food… to make a forced musical comparison, it’s like if you had this amazing set on stage, you could hear the vocals but the singer would be nowhere to be seen, and there’d be these fake musicians all wearing matching cool outfits, hardly pretending to be playing their instruments to the music being played from the PA system. As you’d be watching this, all you could do is start dancing to the strong beat rising from below. Yeah, it feels pretty lifeless if you liken it to music, right? But on the other hand, if you were to think of it as just a cheap attraction, I suppose it’d be fine as long as you were having fun.

Now then. Three and a half weeks ago when I was in Hokkaido to record for STV Radio’s “KAN no Rock Bonsoir,” I took the opportunity to drop by at the ramen shop Mikatsuki in Furano. After passing through the traditional restaurant noren, sitting down and having a quick glance at the menu, I went for the soy sauce ramen. For whatever reason, probably because my body’s gotten used to all the strong-tasting ramen that are currently popular, when I started eating my soy sauce ramen I thought to myself “doesn’t this taste a bit weak?” But as I kept eating, I realized just how wrong I actually was.

To make a forced musical comparison, it’s like “Ue wo Muite Arukou” and “Itsudemo Yume wo.” In the upheaval of the Showa era, those were the kinds of famous and loved songs that gave moral support to the people who worked and worked to create the foundation for the plentiful Japan of today. I’m sure Mikatsuki’s ramen, too, has been on that same street in that same spot for ages, being loved by the people of Furano as it has continued to exist for all this time. That’s the kind of ramen it is. Just like it would be impossible for a musician to disrespect and separate the lyrics and melody of famous songs on the level of “Itsudemo Yume wo” and “Ue wo Muite Arukou,” the noodles and soup of Mikatsuki’s ramen belong together.

When I realized that about Mikatsuki’s soy sauce ramen, I suddenly felt that it’s a simple bowl of delicious ramen that soothes your heart.

Two weeks ago I was visiting the Shikoku/Sanuki area. I felt like some local udon and so I got taken to the self service restaurant Sakura-ya. Passing through the noren, there were several people there, ordering bukkake udon or grated radish udon from the missus in the kitchen, paying the bill for their favorite fried foods, or just sitting at the tables eating. I’m looking through the menu as I’m waiting in line for my turn. “What’ll it be?“, I’m asked. “Ummm, one unpasteurized soy sauce udon.” I’m quickly handed my moist udon and having the green onion sprinkled on top. “Here you go. 100 yen.” “100 yen?” “Yes. You can add ginger to your liking and there’s soy sauce at the table, the red one is really hot so don’t put in too much, okay?” Ah, there was such simpleness in that exchange which felt somehow really fresh. It wasn’t anything special, just plain old delicious food. I’m not very knowledgeable on udon, but it was worth going there just for that exchange. Good stuff.

To make a forced musical comparison, it’s like if you were randomly traveling somewhere and there was this ancient local song with a long-forgotten title that’d been passed along generation to generation, and the eldest of the village sang it to you before your eyes. You’d take your high quality recording of it back to Tokyo and when playing it with your leading edge sound system, that’s when you’d realize how nothing beats listening to it while surrounded by that area’s climate and natural features.

I’ve been writing about this two-week span of time so much, I’m gradually becoming more and more incomprehensible. But my point is… what I want to say is… When you can properly see the cook working earnestly to make your meal, there’s something there that you can’t taste anywhere else, and though it’s not fashionable or showy, it’s still profound. Thus, you never get tired of eating there. That’s the kind of ramen that makes me happy.

One day I want to become the sort of musician who’d make you think “that’s KAN, right?” when trying to come up with a forced musical comparison to the above. That’s what I wanted to say.

Whatever. Doesn’t this look good? ↓ 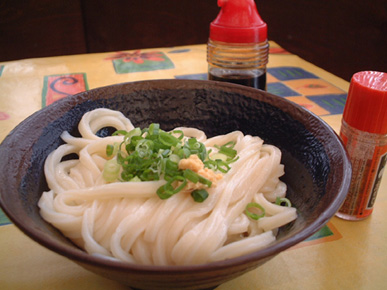