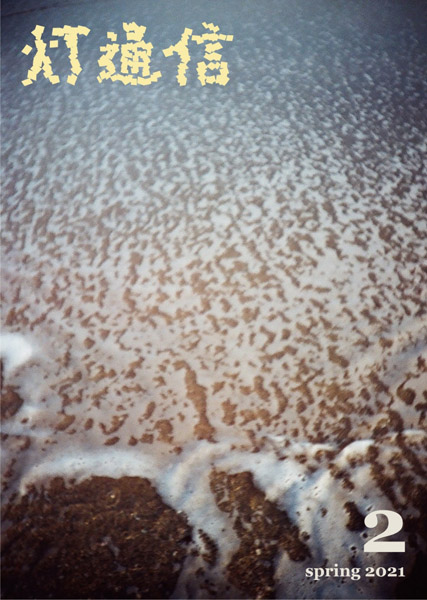 Just as was the case with the first issue, this second issue was created entirely by the members of Lamp with the English translation by yours truly. The design for Issue #2 (again, like for Issue #1) was all done by Sakakibara Kaori. Not only is it interesting, but it even looks pretty!

Below is an exclusive sneak peek from this issue.

How do you handle feeling worried about something?

Someya: I don’t really do anything specific—I just keep worrying like Nagai. But then it also feels like most worries depend on how you’re feeling, and so going to sleep might be the best thing. So that’s what I do.

Sakakibara: Don’t you have any sleepless nights?

Someya: No. I suppose I’m never that worried.

Nagai: For me, it’s like I’m in constant anguish. I’ve given up on not feeling like that. Anguish is normal to me. I’m seriously envious of people like you.

Someya: What do you worry about?

Nagai: Just trivial things. The passage of time and stuff. Or like, knowing what the right answer is but being unable to move towards that direction. I wake up every morning with a sense of anguish.

Someya: You worry about that kind of stuff? Well, yeah. There are no solutions to things like that.

Sakakibara: You really just don’t worry about anything, do you?

Someya: Nope. Thinking about this question I came to realize how I really don’t. But if I was worrying about something, it might be the kind of thing that Nagai mentioned—stuff that goes away with sleep.

Sakakibara: When I sleep it feels like I just disappear.

Nagai: It’s the easiest way to be.

Sakakibara: Yes. It’s so pleasant. So whenever I’m having a rough time I tend to just sleep. When I’m asleep it’s like me and my worries both vanish from this world.

Nagai: Well, it’s not as serious as I make it out to be. Still, that anguish is always there in the back of my mind somewhere.

Someya: Kaori, what did you mean by “time medicine”?

Nagai: I can agree with that. Basically, you go on about your business and some days things go your way; some days they don’t. And then that repeats over and over again until finally you die.

Someya: Back in elementary school one of my classmates used that proverb—”time heals all wounds”—and I remember feeling moved, or maybe shocked, hearing them say that. I’d never even thought about life that deeply.

Nagai: That’s why people like you who can always remain so weirdly positive are the happy ones. You’re a pleasurer.

Nagai: Okay, fine. But this one time me and “A” (Note: Nagai’s friend as introduced in the “Pajama Travel Journals” of Akari Tsushin Issue #1), we were talking about the “winners” and “losers” in life, and he instead announced himself to be a “pleasurer.” It made me laugh.

If not music, what would you have been doing for a living?

Nagai: Since I didn’t have anything in particular I wanted to do, I would’ve just gotten any normal job.
Sakakibara: I wanted to be a librarian.
Someya: I worked co-op jobs.

Someya: Nagai, I forget—did you actually do any job hunting?

Sakakibara: We were right in the midst of that whole job drought back then.

Someya: Right. We all decided we’d just have to pursue music.

Nagai: We were strangely optimistic about it, too. Looking back we had no guarantees that it’d work out.

Someya: Didn’t your parents have anything to say about you not looking for work?

Nagai: I vaguely remember once getting into an argument with my old man. I think ultimately he did tell me to do as I pleased though.

Someya: Huh. It might be my first time hearing about that. So either with or without music you still wouldn’t have searched for employment?

Nagai: No, I’m sure I would’ve worked somewhere. Sloppily.

Someya: Oh. So you told your dad that you were going to be doing music?

Nagai: I think so. But when we put out our first album and I had him listen to it, he seemed pretty satisfied after hearing its contents—I think he’d had an impression of us being this group who just played on the streets.

Nagai: Yeah. We’ve done well, haven’t we? Looking back. It’s all thanks to Someya’s strangely positive outlook though.

Someya: I’ve always felt more guilty towards your parents rather than you two personally—after all, I’m the one responsible for inviting you along.

Nagai: You’ve always been saying that. But honestly, now I can’t see myself having lived any other way.

Someya: By the way, I personally think I would’ve done okay in life even if I had just found regular employment. I’ve got a rather high sense of self-esteem.

Nagai: Most likely, yeah. I’m someone who can’t work a job properly, so I probably would’ve been scorned by all my co-workers and suffered as a consequence.

Someya: In your case it’d depend on how the company made use of you.

Nagai: I feel like the secondhand book industry was my salvation in that sense—I was suited for that sort of a somewhat “crude” industry. Everyone’s kind of laid back in a way.

Someya: True. There is something loose, free, off the cuff about it all.

Nagai: Exactly. It’s not that I think of myself as being a weirdo, but I just felt like I fit right in. Now there’s more and more young booksellers popping up, but it’s like they’re much more conscientious about their approach. It’s a shame.

Someya: I wonder what Kaori would have focused on if not for Lamp…

Sakakibara: I also applied at a secondhand bookstore when I was looking for part-time work. I went to interview both there and at the company I now work at. I finally decided on my current company because of the commute and because the nature of the work itself seemed to suit me better.

The above is only a small excerpt (2 out of the 10 Q&A from the “4 AM Chat” segment). Do check out the full issue to read about the Lamp members’ strange habits, happiest life memories, dreams for the future, favorite books and films, secrets previously never disclosed to the public, and much more!

Please head over to the Lamp Spotify Store and show Lamp your support with a purchase. It sends a clear message that you want to hear more from them in English.