I would like to begin by asking the readers a question.

── Do you know Nakadai Tatsuya?

I’m guessing the majority of you would answer that question in the affirmative. Nakadai Tatsuya — it goes without saying that he is one of the absolute greatest actors representing the world of Japanese cinema and theater.

I would then like to ask a different question.

── What is your image of Nakadai Tatsuya?

Being asked this question, I’m sure ten people would give ten different answers. Even if we just look at his appearances in the films of director Kurosawa Akira, he played the eerie yakuza in Yojimbo, a master swordsman of integrity in Sanjuro, a detective with a sense of justice in High and Low, Takeda Shingen as well as a thief in Kagemusha, and King Lear in Ran. All very different roles, and yet, I feel like any of those roles could be my image of Nakadai Tatsuya.

Taking this into account, here is my final question.

── What kind of an actor is Nakadai Tatsuya?

To tell you the truth, that question is something to which I simply didn’t have an answer for before doing my research. It felt like I knew him, when in fact I hardly knew Nakadai Tatsuya — the actor — at all. Once I realized this, I became very eager to learn more about him.

Once I set out to do my research on him, I came to a realization. This man has worked with nearly every great master and actor of Japanese film, and in most cases he has been with them on set in some important role. In other words, Nakadai Tatsuya is not only an actor, but also a living witness to film history. How were all those great masters and actors reflected in those big eyes of his? I felt like I had to meet him and talk to him in person… I couldn’t contain myself.

It was at that very moment when I was approached by my editor from the PHP Institute who asked me if I would be interested in writing a new book about a movie star. My response to them was immediate. “Let me write about Nakadai. Please.”

Thankfully, Nakadai readily complied to my request for interviews and for adapting said interviews into a book. And so, beginning in June 2011, I got to ask him questions to my heart’s content during ten different occasions and for a total of just under 15 hours.

I was so very nervous at that first interview. It is one thing to have asked for an interview opportunity, but it was a whole separate thing to realize how my interviewee was literally none other than Nakadai Tatsuya. I am 45 years younger than him — how could I possibly face him? From the day that the date was set, to the day of the actual interview, my legs wouldn’t stop shaking. When the day finally arrived, my nerves were so bad that even just getting to the actual location made me completely exhausted.

I was to sit down with him in the quiet vastness of the training hall of Mumeijuku, his acting school. I was filled with an overwhelming feeling of tenseness.

Finally, he appeared from behind the doors and suddenly it was just us two, face-to-face at the center of the training hall. He was big. He is physically a large man, too, but it was more so the intensity of his sheer presence that I just could not help be overwhelmed by. Nevertheless, I somehow mustered up the courage as I began asking him questions.

So what happened next? Nakadai had such a gentle smile on his face as he began speaking to me totally candidly. Before I’d noticed it, the strained atmosphere in the training hall had changed into something peaceful. Suddenly my nervousness was gone and I was able to ask him question after question without a hitch.

From that point onward, it was but a series of astonishment and excitement for me. The thing that left the biggest impression on me was his incredible memory. Without any preparation, Nakadai had the perfect answer for each and every question I asked him.

Moreover, he was always quick to start a one-man show in an elaborate re-enactment of some scene from the past. Even just listening to him speak, it felt like the stories from all those film studio sets were coming to life in front of my eyes. “So this is the art of conversation; the power of expression of an elite actor,” I thought to myself as shivers ran down my spine. With Nakadai Tatsuya’s intelligence as my intermediary, I was able to vicariously experience sixty years at the forefront of post-war Japanese film history.

But all these scenes from the Golden Age of Japanese Film that I came to see through my interviews with him, and furthermore the full picture that I came to develop of the actor Nakadai Tatsuya — what would be the best way of conveying it all to the reader?

After careful deliberation, the answer I arrived at was that I would organize this book around Nakadai’s monologues, with my additional explanations where I deemed it necessary. My reasoning behind this decision was that it would be the most direct way of conveying to the reader Nakadai’s words and the feelings behind them, as well as the deep emotions that I personally felt due to the sheer magnitude and significance of the fact that I was talking to Nakadai Tatsuya — who was literally right there.

The words of Nakadai that are written in this book are not just tales of the past. He also raises his issues with the current era and offers advice as to how we might carve a path to the future. Speaking as the author, I would be most pleased if readers could glean some of those insights of his through reading this book. 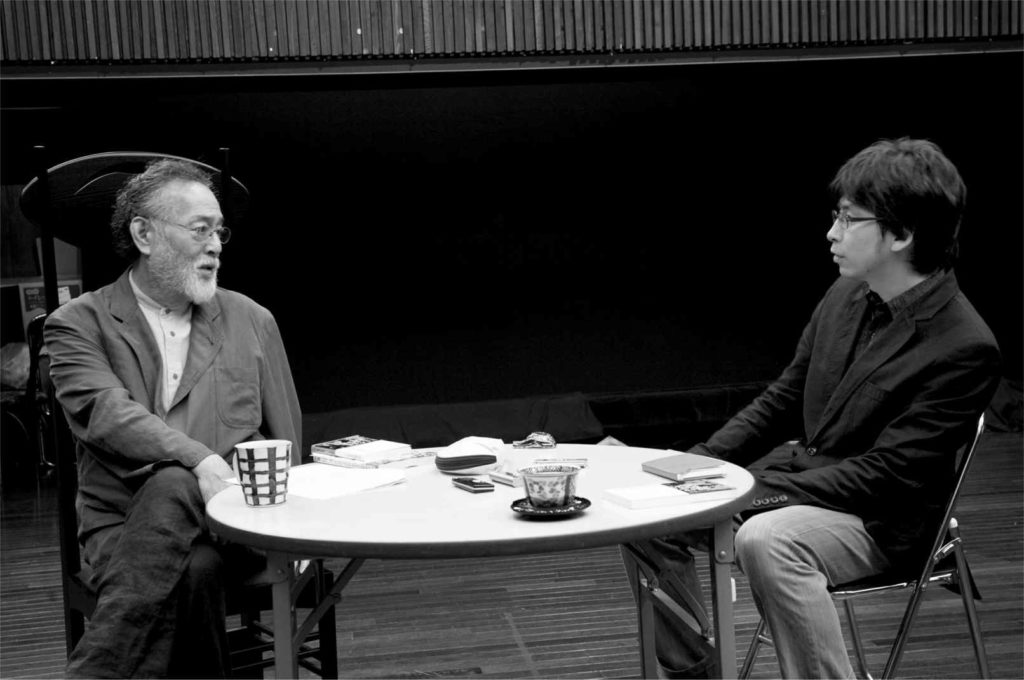 Notes on the Definitive Edition

After publishing “Nakadai Tatsuya on the Golden Age of Japanese Film” via PHP Publishing, I have had the privilege of forming a friendship with Nakadai himself. As a result, I came to a realization: this book was missing something.

That missing “something” could be divided into two separate pieces.

The first piece is that I did not do a satisfactory job in the book on delving into the bottom of Nakadai Tatsuya the actor. Through my interviews with him, I’ve since gotten to interview many other veteran actors about their lives in a serialization for the Shukan Post magazine among other places, and I was always surprised by just how meaningful their words have been even to someone like me who is not an actor. Through this, I came to understand how my interviews with Nakadai had been lacking in the sense that I hadn’t asked enough about his “acting life.”

As I initially wrote in the Introduction of the first edition, I have in this book interviewed Nakadai as a “living witness to film history.” As a result, I got to hear so many exciting stories about the film industry people of the time; about all the great experiences that he’d had. And yet by the same token, that made it so that I had my hands full with all of that. Whereas in my later interviews with other actors where I will persistently ask them about their beginnings as actors and what they feel particular about when it comes to acting — acting theory and art talk — that’s something I couldn’t delve into with Nakadai. The more actors I interviewed, the more I began to regret not taking that opportunity with him. Furthermore, it was always wonderful whenever Nakadai spoke to me about art, so I strongly felt that I had to write all of that down, too.

And so in the Prologue of this Definitive Edition, I asked Nakadai in additional interviews about his days at the Haiyuza Training School where he got his start as an actor, and about the teachings of his mentor, Senda Koreya. In addition, collected in the Extras of this Definitive Edition are various fragments of what he has told me in regards to art and acting theory.

There was a second “missing piece”: the present-day of actor Nakadai Tatsuya.

These past few years, I have been given the opportunity of seeing Nakadai during dress rehearsals and movie shoots. Through those experiences I have been able to personally witness exactly what Nakadai thinks; what he battles with; how he struggles; how he fights… And consequently, how he expresses himself.

What I understood through doing so was that not only is Nakadai a legendary actor who has already left an amazing mark on the world, but that even now he is active in his acting; how even now he is pursuing new ways of acting. In the first edition, however, this was something I didn’t touch on very much because I was approaching him from the angle of him being merely this “living witness to film history.”

Sometimes he is an athlete, sometimes an artist, sometimes an artisan, sometimes an entertainer. Nakadai — always aiming higher and higher, never content with his past accomplishments, always striving; always struggling to show a new side of himself to the audience… And succeeding. This is an active duty professional. Upon realizing this, I felt like it was yet again something I simply had to write about.

Closely following Nakadai around and finding out about his present-day circumstances became a major component of this Definitive Edition’s Extras section. At the end of the book is what could be called the culmination of these new interviews: my on-location report from the filming of A Duel Tale, a period drama starring Nakadai in the lead role. (In addition, there are also many newly-published statements regarding film history which I didn’t get a chance to ask him about in our previous interviews.)

Because of these reasons, I believe that for both the people reading this book for the first time as well as for the people who already read the first edition, this book has become something that will allow you to experience a new, fascinating side of Nakadai Tatsuya.

In closing, I want to express my heartfelt gratitude to Bunshun Bunko’s Funayama Mikio and Kodama Ai for accepting the idea of doing this new Definitive Edition, to the people of Mumeijuku for all the favors that they graciously granted me, and finally to Nakadai Tatsuya for all the wonderful times that he has continued to bestow upon me. 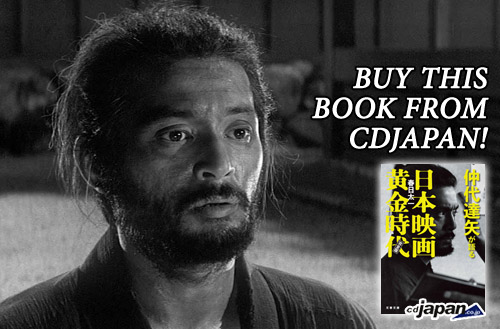